Does it matter what state I live in if I want to use the Law Offices of Jeffrey C. Pettys to help me get a Visa for my fiancée?

No. Our offices can assist any US Citizen and most Residents living in all fifty states.

If you have a question or concern that is not addressed here, feel free to contact us and we will be happy to answer any other questions you may have. 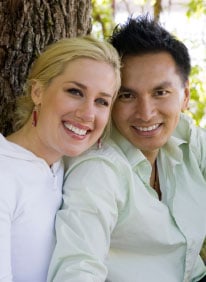 What is a Marriage Visa?

Basic Information about the CR1 and IR1 Visa

For U.S. citizens that want to bring their foreign spouse to the United States, the U.S. offers a couple of different options and they are the CR1/ IR1 visa and the K3 visa. While the K3 marriage visa is still in existence, changes in processing times have made CR1 and IR1 visas the only real option for most applicants.

The CR-1 visa is known as a Conditional Resident visa and grants a foreign spouse conditional permanent residency. Foreign spouses that receive a CR1 visa can typically work in the U.S. within a matter of months as soon as they receive their green card. Since permanent status is considered conditional, the newly married couple must apply to remove conditional status jointly to prove that the foreign spouse did not get married to a U.S. citizen merely to circumvent U.S. immigration laws. This must be done before the two-year visa expires and it is actually recommended that the couple starts the process ninety days prior to the visa expiration date.

The IR1 (Immediate Relative) visa is issued to foreign spouses who have been married to a U.S. citizen for a period longer than two years. The IR1 visa is very similar to the CR1 visa with the primary difference being that an IR1 visa recipient will be given unconditional permanent resident status and be able to work immediately when they arrive in the U.S.

Requirements of the U.S. Petitioner/Sponsor

In order to apply for a CR1 or IR1 visa, a foreign citizen must be legally married to a U.S. citizen. Unfortunately living together is typically not enough to qualify a foreign spouse for an immigration visa. Common-law marriages are occasionally recognized by the United States Citizenship and Immigration Services (USCIS) but that is dependent on the laws regarding common-law marriages in the country where the marriage took place. Update: With the recent Supreme Court ruling against the Defense of Marriage Act, same-sex marriages are now recognized by the United States for the purposes of immigration.

While there are no age requirements for a U.S. citizen to file the Petition for Alien Relative, there are age requirements for the U.S. citizen to file an Affidavit of Support which may be necessary if the foreign spouse cannot prove that he/she will be able to financially support themselves when they immigrate to the U.S. The U.S. citizen must also maintain primary residence (domicile) in the United States to file Form I-130 and must also live in the United States to file an Affidavit of Support.

The first step in the CR1/ IR1 marriage visa application process is filing a Petition for Alien Relative better known as Form I-130. Form I-130 is filed with U.S. Citizenship and Immigration Services (USCIS) by the U.S. citizen for his/her spouse to immigrate to the United States. Below are some of the items that may be required by USCIS with form I-130:

When submitting form I-130, you will have to prove that your marriage is legitimate and you will most likely be asked to prove more than a marriage certificate. USCIS is basically looking for proof of an “ongoing” relationship and some of the acceptable methods are joint bank accounts or joint ownership of property. Some other methods of proof that you can provide are phone records illustrating that there is ongoing communication between the two parties, travel documents for when you visited your foreign spouse, receipts for money transfers to your spouse and copies of wedding photos.

After USCIS processes and approves your petition, it will be forwarded to the National Visa Center which is also known as the NVC. The National Visa Center collects forms and fees for U.S. Embassies and Consulates. The NVC will begin processing of the petition once all fees have been paid and will also send out a packet detailing the various forms and documents that will have to be produced. Below is a general idea of some of the documents that may be required:

Once the NVC has determined that all required documents have been submitted they will schedule an interview with the foreign spouse to determine if the visa will be granted. The file containing all of the documents will be forwarded to the U.S. Embassy or Consulate closest to the foreign spouse. Instructions on how to complete the required medical examination will also be sent to the applicant at this time. The medical examination must be performed by an approved doctor and the applicant will be supplied with a list of approved physicians.

Along with a medical examination, the foreign spouse applicant will also be required to meet certain vaccination requirements. Some of the vaccinations that are required are: Hepatitis A, Hepatitis B, Mumps, Measles, Influenza, Pertussis, Meningococcal, Pneumococcal, Rotavirus, Polio, Rubella, Varicella and Tetanus. To expedite the medical examination process, it is recommended that the foreign spouse applicant have the vaccination records ready and available at the time of the medical examination. The visa applicant’s regular health care provider should be consulted with and asked for a copy of immunization records.

How Long Does the CR1/IR1 Visa Process Take?

Typically, the process takes between 8-10 months. However, the amount of time it takes to process an CR1 or IR1 visa can vary from case to case and country to country. One thing is for sure though and that is that any discrepancies in the application process, such as returning incomplete forms, inaccurate information or not submitting all requested documents, can dramatically extend the amount of time it takes to process the marriage visa application. There are specific and meticulous instructions that detail exactly, for example, how Form I-130 will have to be filled out and, unfortunately, even a small mistake can and will get your application rejected or returned.

Can same sex couples apply for a Marriage Visa?

Yes. With the Supreme Court’s recent ruling against the Defense of Marriage Act (DOMA), I am of the firm opinion that same sex couples can now apply for a Marriage visa.

Visa Services
Client Reviews
★★★★★
I was lucky enough to contract with Mr. Jeffery Pettys as my lawyer. I paid a very reasonable fee for his services and he was always available for my questions. It became obvious that the Marriage Visa application is not a simple process, but Jeff led us through the requirements flawlessly. In addition, my wife not only got her Marriage Visa but also her green card at the same time. I really could not have expected a better experience. I highly recommend Mr. Pettys. Larry N.
★★★★★
Bringing one’s loved one to the United States can be a complicated and stressful process. My wife and I used Mr. Pettys’ services in preparing her K-1 Fiance Visa. With Mr. Pettys’ help we were able to complete this promptly and without worry. At every step of the way Mr. Pettys provided us with not only expert work but peace of mind that only a professional with detailed knowledge of this complicated system can provide. If you are about to go through the process of applying for a Fiance Visa, I highly recommend his services. Cord S.
★★★★★
Jeff Pettys was such a pleasure to work with, he helped us understand the process and walked us through any thing we needed. With such an important life event, as getting married, it was important for us to choose a loyal lawyer. Jeff's knowledge and experience left us with the relief we needed, knowing that we were in good hands with him. Thank you Jeff for all of your hard work and we look forward in working with you on our green card transition. Thanks Jeff! Daniella M.
★★★★★
I found Attorney Jeff Petty’s webpage, and decided to contact him. After communicating on the phone and via the internet, I decided to hire him. It turned out to be the best move I made. Jeff started the fiance visa process the very same day. He helped get the K Visas and the Green Cards for my fiancée and her daughter. My experience with Jeff has been very rewarding. All my phone calls to him were returned promptly. He takes time to get to know his clients. I truly feel he loves his job, and is excited to see good people fulfill their dreams. Andrew D.
★★★★★
I cannot say enough about how Jeff kept this case moving forward, gave his expert advise and heartfelt counsel, all while making us feel like we had not only an attornney, but a FRIEND helping on our case. Take it from me—this is THE lawyer to hire if you need help with Immigration issues—he is the BEST. I can never thank him enough!! Kim S.
View More
Submit a Law Firm Client Review